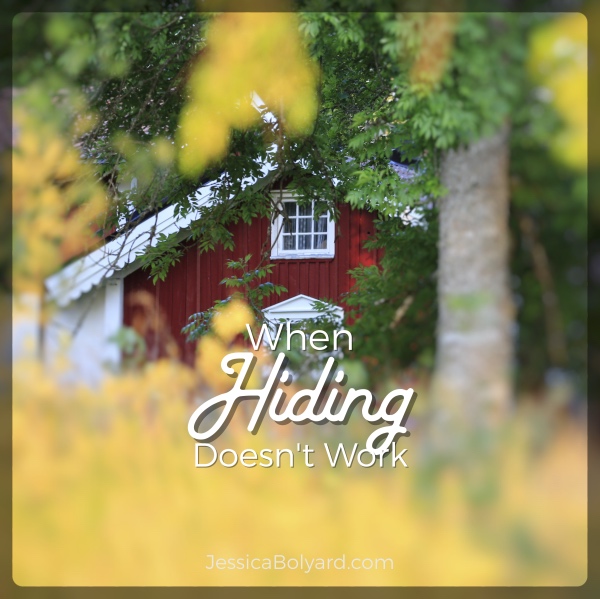 God works in really funny ways. Many times the things He does seem arbitrary, and as we start off on whatever new path He has paved for us we think, “Well, this doesn’t make much sense….” We don’t always get to see why things work out the way they do. Sometimes, though, on down the road, it’s shown to us with a clarity that we can’t miss.

Sometimes it’s a little of both. That’s how it’s always been for me.

I wrote last week about how I struggled intensely with depression, anxiety, and panic attacks during the first years of my marriage. My illnesses separated me physically and emotionally from people I loved, and I spent most Sunday mornings on a stool behind the sound board at church while my husband ran the audio for worship. If I was back there, no one would see me and if they did, they wouldn’t feel like they could approach me because of the important technical things going on.

I liked it that way. It gave me an out from the otherwise inevitable social interactions of church community that I had come to dread.

I really liked it that way. I was comfortable back there.

But my husband’s calling to serve our church community in that way was not my calling, and I didn’t belong back there. That wasn’t my place, as much as I wanted to make it so.

(Have I mentioned that I really liked being back there? Because whether or not it was actually good for me, I really did.)

Around that time my pastor, who has this *way* of seeing potential in people that they have no idea is there, asked me to be on a creative team dedicated to planning and designing our worship gatherings – series titles and stage design and things like that. It sounded interesting enough, so I went. I became part of the team.

One week, in our Sunday afternoon meeting, it was mentioned that the “welcome and intro” girl would be out of town for a few weeks, and someone was needed to fill in.

Truthfully, I have no idea exactly what happened next. I don’t remember the conversation or how I reacted, but somehow the group reached a consensus that I would be filling in while she was gone. And eventually, somehow, I became the one to do it all the time.

The girl who wanted to be invisible on Sunday mornings (and pretty much all the time).

I was going on be on stage.

In front of everybody.

With that, I began a period of my life characterized by a desperate clinging to God. I have to confess that some of my desperation was selfish, borne entirely out of my fear of screwing up and humiliation.

It was a constant conversation with God – a constant reminding Him that I needed His help and that I couldn’t do this on my own. Before I approached the stage every Sunday morning, I would bow my head and close my eyes and plead with God to come and be real to me in that moment. I would beg Him to make me invisible and silent so that no one would see or hear me at all. I would desperately ask over and over again for Him to do all of it in my place.

And every week, I trembled and stammered my words onstage, holding the microphone with both hands as I attempted to steady my shaky hands.

And every week, without fail, God showed up. Some weeks, He showed up and spoke eloquent words through me and I would step off the stage amazed at what had just happened. Some weeks, though, words failed. My confidence waned. I messed up – BIG TIME – but on those weeks, God was still there. He would meet me back behind the sound board, where I would retreat to sit on the floor and cry and beg Him to take this whole job from me. To not make me have to do it again. He would show up there, settling my nerves and reminding me that He was strong enough when I had nothing to give.

I developed a love-hate relationship with the microphone. I hated the fear. I hated the feeling of tripping over my words and not being able to get them back. I hated having people looking at me. But I came to love having that kind of do-or-die desperation in my conversations with God. I loved feeling Him so closely, even when I crashed and burned. I loved knowing I was doing something He wanted me to do, and I loved the feeling of obedience in spite of my desire to run and hide.

I always say that God has a sense of humor. Why else would He take the girl who just wanted to be invisible and give her a microphone?

The truth is, though, that I don’t think it’s God’s sense of humor that put me onstage all those years ago. I think it was His infinite wisdom, knowing that doing that would put me in a position of relying on Him in a whole new way. I think it was His matchless mercy, taking the most unlikely person in the room and giving her a role and a purpose in His church. And I think it was His ability to see beyond the present, knowing that a time was coming when that scared young woman behind the sound board would realize she had a voice.