When They Know You’re There

I wish I could say that I’ve always been interested in Jesus. That would be dishonest, though. And if I really think about it, my years of disinterest in all things True actually – in a very real way – made me who I am today. People say that sometimes – that we’re products of our pasts – but in my case, I can see the pieces strung together like pearls on a necklace.

Take, for instance, my middle and high school years and my complete aversion to attending youth group at my church. I think I’ve written before about hiding in the bathroom to avoid Sunday school, but I don’t know that my running from the man who would have been my youth pastor has ever come up.

If it seems like an exaggeration to say that I ran from him, I assure you it is not. Because my dad played piano as background music for our church’s Wednesday night fellowship suppers, my sister and I found ourselves in a maze of round tables and white plastic table cloths every week. We would navigate our way through the line, getting our plates of chicken and gravy (or, if we were lucky, spaghetti) and making our way back to our inconspicuous table in as inconspicuous a way as possible.

Our biggest fear? Being noticed. Scratch that – our biggest fear was having to interact with anyone. (In other words, you can see me….but just don’t talk to me.) We were both shy and awkward in those settings, and we never felt like we fit in with the enthusiastic church crowd (hence the hiding in the bathroom). Our hearts weren’t in it, and I’m afraid to think now how our attitudes probably reflected that.

In any case, I remember many Wednesday nights when I saw the youth pastor and, knowing he would want to speak to us (since we were youth, after all), ran away. I don’t mean surreptitiously ducking behind a corner, but literally running away. There may have also been incidents of hiding under the table, shielded by the overhanging table cloths as I pretended to look for my napkin. To say I avoided him would be an understatement.

Despite my efforts, though, I did have to talk to him sometimes. I was on his radar probably as much as he was on mine, and from today’s vantage point I can understand why. He had something I needed, whether I knew it or not. He would catch me unaware and, in what never failed to surprise me, would be….nice. That was odd to me, because I assumed he would be upset with me for my bad attitude. Most people were, so why not?

No matter what else he said to me, he would always – always – end the conversation with, “You know how to reach me, so if you ever need anything, please call.” I always thought that was a nice thing to say…but never, ever had any intention whatsoever of calling him.

The summer after I graduated from college, though, I found myself in a bad place. The circumstances that lead me there aren’t particularly important now, but let it suffice to say that I had made some pretty bad choices and was facing the consequences. Fearful, lonely, and desperate, I knew what I had to do.

I had to call (who would have been) my youth pastor.

Y’all, it had been four years since those Wednesday nights avoiding him. He was no longer the youth pastor, but was the associate pastor at the same church. I was uncertain if he would even remember me, but with shaky hands and tears in my eyes, I picked up the phone and called the church. He answered, and all I could choke out was my name and, “I need to talk to you.”

My eyes are tearing up even now, remembering how I felt when he warmly and without hesitation scheduled a time the very next day for me to come to his office. He never shamed me for avoiding him all those years ago, and never asked me why I called him, of all people.

If he had asked, though, I’d have said, “Because you always told me I could.” 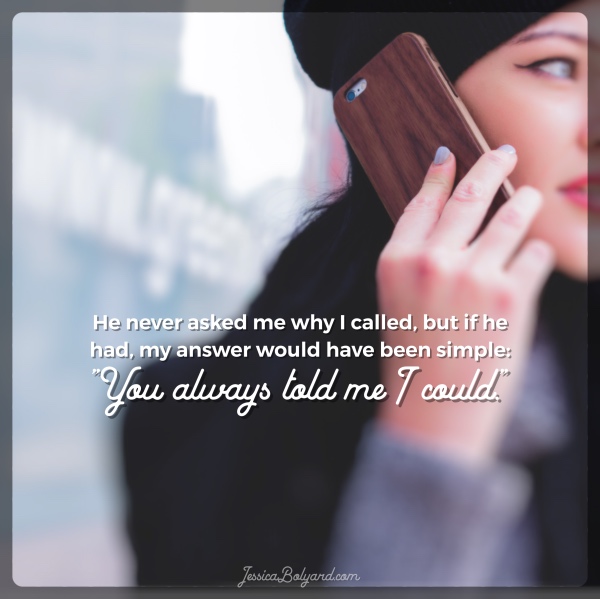 His relentless pursuit of me changed my life. When I was drowning, I remembered a life preserver that had been tossed my way. I had ignored it, but when I needed it, it was still within reach.

Maybe it seems simplistic. Maybe it seems too perfect to be true – that my would-have-been youth pastor led me to the community group where I got to know my future husband…married us less than two years later…planted the church we have attended since its beginning…was the one to see gifts in me that I had no idea existed. Maybe it seems like a bit of a stretch that things would work out that beautifully. Bottom line? You just never know.

(My pastor will  probably read this, too, which will be fun. I had coffee with him this morning to talk about some things, so clearly things have changed. Hi, John!)

But friend, all I can say is that our God – the one I was running from back then? He’s passionate about redemption. He loves a good story, and He jumps at any opportunity to show us how He builds good things out of rough scrap material. It’s what He does.

And so today, can I ask you to do me a favor? As the adult version of a girl who didn’t know what she needed, I beg you: be the person you needed when you were younger. Had my pastor not let me know I had someone to turn to and somewhere to go, I legitimately don’t know what I would have done, and I don’t know where I would be today.

Think back on what you needed when you were ten or 15 or 17 or 22. What do you wish someone had done for you? Said to you? What do you think would have helped you? Do it. Say it. You may not be a pastor or youth leader or even good with teenagers. But I’m almost positive you know someone, and I’m almost positive you have something to offer them. Find them. Be that person for them, because even if they hide under the table or run into the bathroom, you’ve made yourself known. You’re on their radar, and when they need a life preserver they just might picture your face. They just might finally reach out.

Because we all need each other,