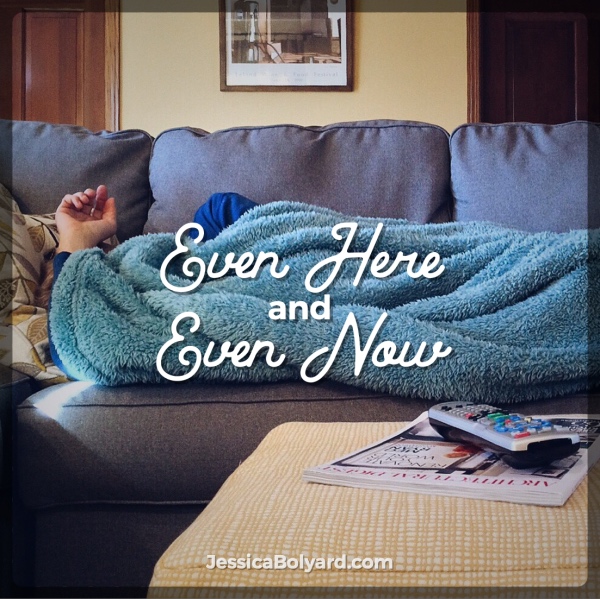 I woke up late this morning, and before my eyes ever opened I felt a burning, stinging, itching pain. My face was on fire. Not literally, of course, but as soon as I flipped the bathroom light on, I saw – through swollen eyes – that I had red splotchiness and puffiness to match the irritating itch. It was not good. Nor pretty.

{I think it’s a newly-developed reaction to a face cream I’ve been using for a long time, so I’m not concerned about what it is or what I need to do about it. It’s just irritating (and looks really bad).}

My daughter got up not too long after I did, and immediately began complaining about a sore throat. I had already heard her nasty cough, and a quick brush of her forehead let me know she also had a fever.

I hadn’t even been up for thirty minutes, and my entire day was derailed (and my face was really, really hurting).

I got her some juice (with an attitude I’m not proud of), and as I got my coffee ready my eyes fell on a note I had left on the counter last night. It was a little note I had made during our family time Bible study last week, to remind me of the main verse we had talked about. 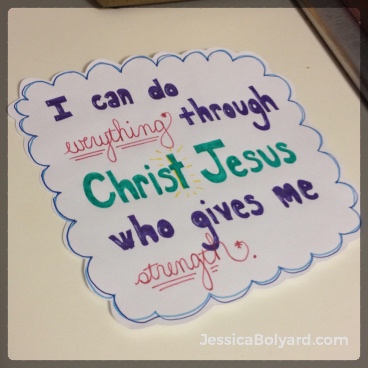 I read it…sighed…and felt better for a second. The more I thought about it, though, the more ridiculous I felt.

See, Paul – the guy who originally wrote those words that are too often quoted out of context – was in prison when he wrote that. Prison. And not a nice, cushy prison, either – likely an underground, stone-walled prison of dark, filthy seclusion. It was far from being the ideal situation, yet it was in those circumstances that Paul wrote that he had “learned to be content in every situation” (Philippians 4:11).

This guy was in an unthinkable situation, yet remained positive and leaned on God and trusted that by His power he would be able to make it through. He leaned not on his own ability to power through, but on the power made available to Him through Christ. And it wasn’t a declaration of, “I want to do something, and because I have Jesus in my heart, I can do it! I can do all things!” We tend to think of this passage that way, but it’s so much more than that; remembering that this morning made me feel a little ridiculous.

My situation today – or ever – isn’t as bad as that, but I crumble under pressure and allow myself to wilt with frustration. As I considered my minor “trials” this morning, I began to feel silly for needing such encouragement, written by a man who was in a situation so much more dire than my own. This isn’t that big a deal, I told myself. Seriously.

But then something else occurred to me. Something that has me repeating that verse – “I can do everything through Christ Jesus who gives me strength” – over and over to myself today. It occurred to me that no, my suffering is nothing compared to what Paul felt, and is minor compared to what others around the world are enduring even today. My problems are so trivial that it seems sometimes like leaning on a verse like that in order to bear up under the pressures of everyday life – to be faithful to the place and the roles God has called me into – to be the very best wife and mom and friend and daughter and sister I can be…well, it seems like overkill.

Needing Christ’s strength to hold me up here? In this? Really?

But I think that one of the most beautiful things about the Gospel of Christ is that yes, it is for me, right where I am. I may not be languishing in an underground dungeon, but my troubles are important to God. I may not be writing anything that will be referenced for thousands of years and used as encouragement for believers around the world, but my story is important to God. I may not be used to reach millions of people for Christ, but my place in this world is important.

I am important to God, so if I am having a hard time, that matters to Him.

I am important to God, so if I am having a hard time, that matters to Him. 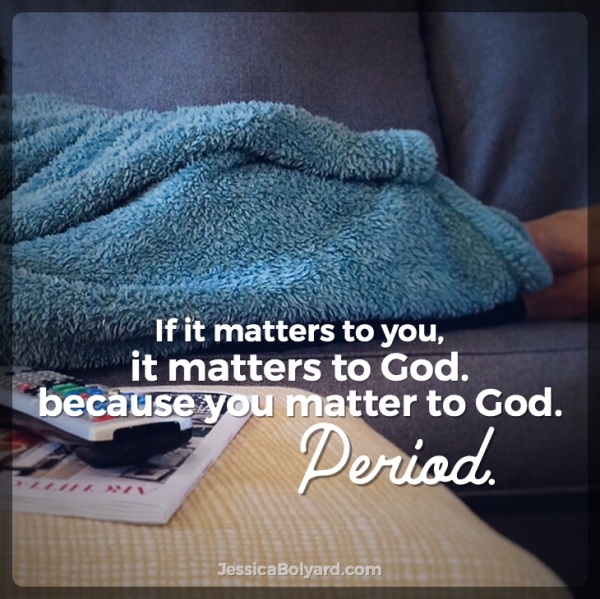 If He has called me to be somewhere and to do something – even something as “mundane” as staying at home with a sick child while I myself am not feeling well – He will give me the strength to do it. He will carry me through that situation.

Does He weep for me and my rearranged plans the way He weeps for the persecuted Church around the world…or for starving refugees….or for victims of human trafficking of any other of the cruel injustices in the world today ? No, I don’t think He does. His heart aches in a special way for the injustices of those situations. But does He withdraw His hand and keep His strength from me because my troubles aren’t that big a deal? No, I definitely don’t think He does that.

And friends, I don’t know what you have going on today. Your face is probably not painfully irritated (definitely not using that cream again, by the way), but maybe you do have a sick child. Maybe your troubles are elsewhere in your family, or relate to work or your own health or any of a number of other things this life seems to love throwing at us. Whatever your troubles are today, rest assured that you are seen by the God who holds the world in His hands. You are known by the One who created you, and your problems are important to Him because YOU are important to Him.

Yes, His strength – the same strength that raised Him from a stone-walled tomb – is available to help you in whatever proverbial stone-walled prison you may find yourself in today. It is for you because HE is for you. 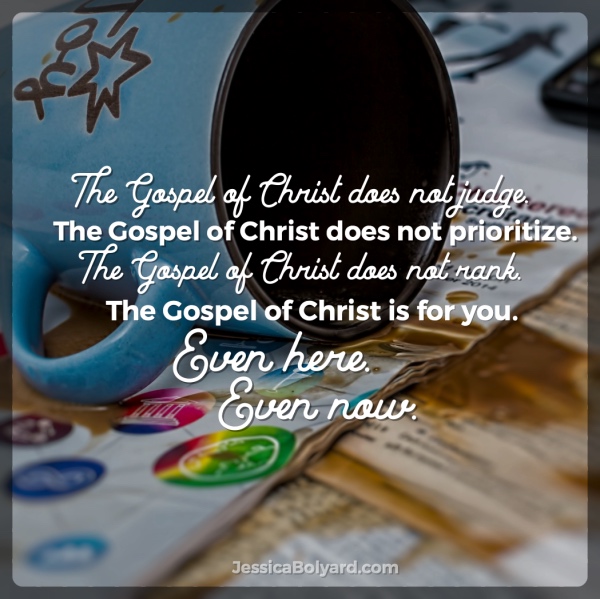 The Gospel of Christ does not judge. It does not prioritize, and it does not rank. It is for you and whatever today brings your way, and it is for me and my splotchy red face. It’s for all of us, no matter what and no matter when. Even here, and even now.

I’m lifting a prayer for you today, friend.

Dear 2020,  I think I’m over you. I don’t think I’m telling you anything you don’t know; I also don’t think you can pretend that our relationship has been a healthy one. I’m just ready to move on from all that you’ve put me through. It’s time. I can’t take it anymore, and I have to believe that something better is coming, and soon. I have to move on and 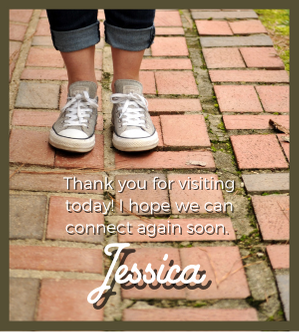