A couple of months ago, while the world still slept in gray and brown here in Georgia, my husband carved an intricate network of biking trails through the woods behind our house. (I use them for walking, though, because the one time I ventured out on my bike I was scared to death. I’ll do it eventually. Just not yet.) It’s been so good for me to have a natural sanctuary literally right in my own back yard. I work for a couple of hours here in my tiny home office and then, as the sunlight that has streamed in my window crests over the house with midday, I give in to the need to stretch my legs and go for a walk. I trade my dormer office for wide open spaces.

The woods are such a tranquil place to be, whether in the middle of winter or the advent of spring. (I’ll admit, though, that the scurry of unseen animals in the pine straw is a little unsettling.) I love seeing the trees do what they do best – growing and reaching and stretching their branches, unhindered by landscaping plans or proximity to the house. They are doing what they were created to do. My favorite thing about the woods, though, are the vines.

I’ve never really paid attention to them before, how they begin their ascent unnoticed from the base of a tree and slowly…silently…make their way upward. They reach a branch…a stem of even the tiniest size…and twist and curl into perfect curlicues until they’re secure enough to continue their climb. As they continue their rhythm of wrapping and curling and climbing, they take over everything in their path. A decayed log on the ground is but a step stool. Young dogwoods, trying to grow on their own, bend under the weight and pressure of the stronger vines. Larger trees that would have stood separately become connected and intertwined, webs of vines stretching from one to another to another. It’s amazing how they do it – carving this path for themselves.

When I pointed out my observations to my husband, he wasn’t as impressed. The same vines I thought were miraculous in their perseverance and ingenuity, he found an obnoxious hindrance.

So it seems that what is beautiful can also become chaos. The individual vines are miraculous, yes, but when their paths collide, we’re left with a tangled mess.

Watching the vines begin to come back to life now, their tender sprouts just beginning to poke through the undergrowth, I think about this struggle I’ve always had with my mind. Our minds are beautiful creations, full of everyday miracles – with neurons and synapses and dendrites (thank you, Google) spreading their branches unhindered. Every day, without our consideration, they do what they do best…what they were made to do. For me, though, the process is uninterrupted until thoughts push through like vines. It starts slowly, one thought at a time, and then they all begin clamoring for position at once. They poke their way into my awareness and overtake whatever else was going on…persistently refusing to be ignored…pressing and pushing their way through my consciousness…intermingling with one another until my mind is a tangled mess. They’re no longer discernible. I find an end and pull at it, only to realize I’m only making the knot worse.

I don’t normally give my mind much attention, which gives it free reign to run where it will. When the thoughts press in, though, my mind is all I can think about. It has become overtaken by the tangled vines of anxiety, fear, and worry. They overtake everything they touch; before I realize what has happened, I have become entangled.

Entangled – trapped to the point of not being able to move. Caught in the web and unable to escape. Held in place with no way out.

But it wasn’t meant to be this way. The “sound mind” I was promised in Christ should not be this messy.

He’s the One who disentangles me. 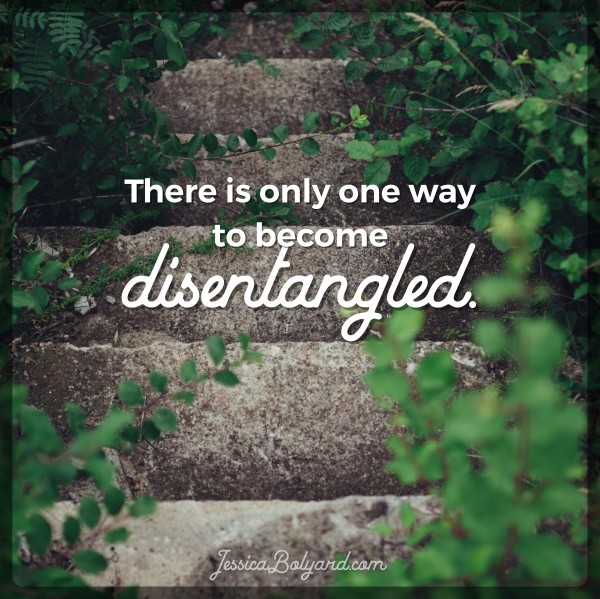 And I remember the true Vine. The One that comes in place of what never had permission to grow to begin with. The new Vine comes into play because this Gardener…well, He’s not content to simply make a way for me to move. This Gardener is thorough. He won’t even let the old vines remain, but transplants this true Vine to overtake the toxic vines that had run rampant. He plants something new – introduces something foreign – that destroys what has held me back. In planting that true Vine, He is planting hope.

And hope? It rises like an invincible ivy. It covers what was and opens the way for what will be. It breaks me out and sets me free.

The true Vine of hope in Jesus frees me from the tangles in my mind. It overtakes everything else but, instead of leading to suffocating immobility, it releases me into freedom.

So as it turns out, not all vines are bad. Maybe that’s why I am drawn to them – because they remind me of my Jesus.

And so I will. I choose Him, because while my thoughts choke like vines and leave me entangled, hope, too, springs up like ivy and climbs toward the light. Undeterred by darkness, it moves through even the smallest spaces. And attaching to that vine – the Vine that reaches upward toward light and not down to trip me up – sets me free. There is freedom in that Vine. There is disentanglement in that Vine.

So many of us are tangled up in the thoughts that take over our minds. The tangled worries about our families and jobs and the future and money and our marriages and friends and the world move unhindered and unopposed. We’re stuck and unsure how to get out. They’re taking over. We’re stuck. Choking. Suffocating.

But hope….hope is the vine that also overtakes everything, leading instead to freedom. And when we let that vine grow it begins to crowd out all the others.

We have a choice, really. We can let the vines of darkness continue to overrun the pathways of our minds, or we can call in the Gardener. The One who knows how to take care of those threatening vines. We can try to prune…we can work hard to cut them back, but only He can carve a safe path and ultimately eliminate them. He introduces the vines of hope we can trust to take us up and out and into freedom. Those are the ones that lead us up – through the darkness – through the canopy of vines – and into the light.

Dear 2020,  I think I’m over you. I don’t think I’m telling you anything you don’t know; I also don’t think you can pretend that our relationship has been a healthy one. I’m just ready to move on from all that you’ve put me through. It’s time. I can’t take it anymore, and I have to believe that something better is coming, and soon. I have to move on and

All content ©Jessica Bolyard, 2011-2021. Excerpts and links may be used, provided that clear and full credit is given to the author, and appropriate and specific direction is given to the original content. In other words, be kind. We're in this together.